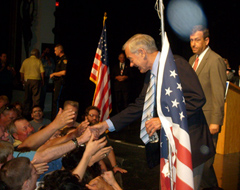 Missouri Republicans are holding their state convention in Branson this weekend. And, as many of the delegates and officials attended a dinner Friday night at the main conference center and resort, presidential candidate Ron Paul held a rally at a theater a few miles away.

The Texas Congressman fired up an estimated crowd of about 1,300 with his call for pulling U.S. troops out of Iraq, an end to what he claims is the doing away of our personal liberties, elimination of the federal income tax, getting rid of the Patriot Act, and pulling the United States out of the United Nations.

The actual business of the convention takes place on Saturday, with many of the Ron Paul supporters who were chosen as delegates fearing they will not be seated because of what party officials call irregularities and what Paul supporters say is an an effort to oust them from the activities.