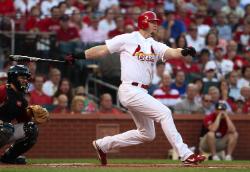 The Cardinals got a key two out hit from Chris Duncan in the first inning and Albert Pujols hit his 13 th homer of the season as the Cardinals took two out of three from Houston by beating the Astros 3-2.

Astros starting pitcher Roy Oswalt has not been the healthiest he’s been and he has been battling through each start, and the Cardinals were able to jump on Oswalt in the first inning as Chris Duncan drove in Ryan Ludwick and Albert Pujols.  It all started after Oswalt got the first two batters out.  Pujols singled, then Oswalt walked Ludwick and Troy Glaus before Duncan made him pay.

Pujols added a solo shot in the 6 th to put the Cardinals up 3-0.  Kyle Lohse said he didn’t have his best stuff, but pitched into the 7 th inning before being lifted after giving up a solo home run to Carlos Lee.

Much unlike 9 th innings with Jason Isringhausen, this game got under control from closer Ryan Franklin who picked up his fourth save and rebounded after giving up a solo home run to Lance Berkman to lead off the 9 th .

Tony LaRussa talks about Lohse and Franklin and Pujols shows his respect for Oswalt.