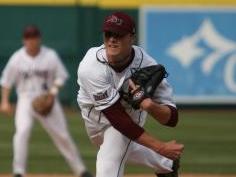 Clubb is the sixth Bear to earn first-team All-America honors and put together the 18th All-American season in Bears baseball history.

One of just five pitchers nationally with at least 11 victories without a defeat, Clubb completed the 2008 season with a spectacular 11-0 record and 2.52 ERA while earning Missouri Valley Conference Pitcher of the Year honors. He left all 14 of his starts in line for the win, struck out 82 batters and limited opponents to a .233 batting average.

Clubb’s 11-0 start eclipsed Jarrod Mays’ 10-0 start in 1995 as the best for a pitcher in school history, while his win total ranks second all-time at MSU for a season and his 103.2 innings rank fourth.

A native of Eureka, Mo., Clubb was also honored as the MVC Pitcher of the Week twice this season and the Scholar-Athlete of the Week three times.

Previous Post: « Central Missouri advances to semi-finals
Next Post: Yes … there has been an increase in tornadic activity this year »