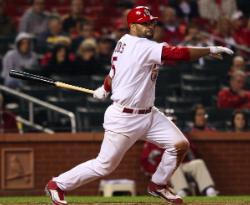 Albert Pujols hit his 12th home run, but Cardinals starter Braden Looper’s ERA is now 5.05 after giving up seven earned runs in 4 1/3 innings as the Cards drop the opener of this series with Houston losing 8-2.

Looper got hit early giving up four runs in the first inning and as Looper said, he put his team in a hole before they even had a chance to hit.  Carlos Lee singled in two and Hunter Pence picked up an RBI in that four run first.

Pujols hit a solo shot in the bottom of the 4th for his 294th of his career.  Then, Brian Barton pinch hitting in the 5th, hit his first major league homer, but that was all the Cardinals would muster off of Astros starter Shawn Chacon who picked up his second win of the year.

It was a tough night for Rick Ankiel.  The usually accurate outfielder launched a throw over Yadier Molina and Lee’s first inning single, then got thrown out at home himself trying to score on a Troy Glaus single to right after Ankiel doubled off Chacon following Pujols’ home run.

download/listen to Looper and LaRussa (mp3)