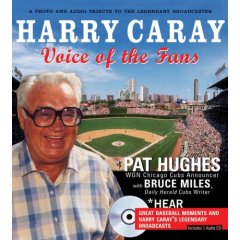 Memorial Day is traditionally the day baseball fans start to pay attention to the Major League standings as things start to solidify and the races begin to take shape. And, what better day than Memorial Day to take a look at a new book about one of the greats of the game who spent a great deal of his career in St. Louis. He wasn’t a ballplayer, but broadcaster Harry Caray was certainly as famous as many of the guys who took the field every day.

Cubs broadcaster Pat Hughes and Arlington Heights Daily Herald baseball writer Bruce Miles have co-authored "Harry Caray – Voice of the Fans," a tribute celebrating the career of the man who became known as the voice of the Chicago Cubs … but who gained fame from the 1940s through 1969 as the voice of the St. Louis Cardinals. The book also features an audio CD with some of the great moments of Caray’s broadcasting career. So, we hear as well as read about Caray’s exploits in the broadcast booth and elsewhere.

The CD contains some of the great moments Caray witnessed as a play-by-play man for the Cardinals, Oakland A’s, Chicago White Sox, and finally the Cubs. With a quarter century as the Redbirds announcer it comes as little surprise that quite a few of the great moments in Caray’s career are also great moments in the history of the Cardinals. They include San Musial’s 3,000th hit and the 1964 National League pennant race which went down to the wire and was won by the Cards on the final day of the regular season. The audio, coupled with the photos, take fans who remember these great moments back in time. Others, who were not around at the time or who lived elsewhere, are magically transported to another era before ESPN, TBS, and SuperStation WGN when baseball lived on transistor radios.

The book gives fans some insight into the early life of St. Louis-born Harry Christopher Carabina and how his life was shaped by his sad childhood. Caray never knew his father and his mother died when Caray was only seven-years-old. Caray then moved in with his mother’s brother and was raised by the man’s wife when the uncle disappeared. We get a glimpse into Caray’s early radio career and his chance to work with the St. Louis Cardinals. It was with the Redbirds that Caray was teamed with former Cardinal Manager Gabby Street, whom Caray looked up to as a father figure. When Street died, Caray was joined by another broadcaster who went on to become a legend: Jack Buck. St. Louis native and former Major Leaguer Joe Garagiola later joined the team.

Hughes and Miles then take readers to Carey’s year in Oakland with Charlie Finley and the Oakland A’s in 1970 to the start of a new career in the Windy City in 1971 when Caray was hired to be the man behind the mic for the White Sox. It was with the Sox that Carey started the tradition of joining fans as they sang "Take Me Out to the Ballgame" during the 7th inning stretch. That tradition continued and gained strength when he moved to Chicago’s North Side in 1982 to broadcast Cubs’ games. Caray already had a national following, but it was during his years with the Cubs that Carey moved into a special realm beyond that of legend. And that special status grew through the 1997 season. Caray died in early 1998.