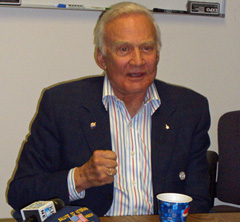 The second man to walk on the moon says the nation needs a space program that reaches beyond the moon–because of the benefits it will provide on earth.

Many like to talk to Buzz Aldrin about the past. But he’s focused on the future and fears the space program isn’t ready for it. Aldrin is in Columbia this weekend for the Memorial Day Salute to Veterans.

He is concerned about a gap developing between the end of the shuttle program and the beginning of the Orion program to return astronauts to the moon. “We’ve got other nations that want to do the same thing we did forty years ago, and they’re going to want to inspire their country (and) develop their education systems,” he says, “And we want to do what? Video Games, TV, Idol competition?”

He points to the great technical achievements of the shuttle and space station program. But he says the space agency is transitioning out of that program into one that will be of more service to the people, extending human presence to Mars, an effort he sees inspiring people to become more involved in getting science, math, engineering, and technology into the educational system. He says leadership in the world is at stake.

“It’s very critical that we return to the moon and not build an empire there,” he says, “because we’ll never get to Mars….Mars is the best place to go,”

He calls Mars “the most desirable place for a second…home for earthlings.”

Aldrin says the spirit of the Apollo program is one of national unity behind a common purpose. He says the space program can inspire the nation again in that same way.

Previous Post: « Mental Health Director insists future of Bellefontaine is bright
Next Post: Royals drop another one to Jays »