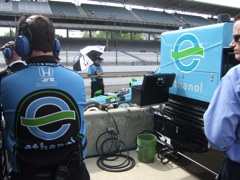 Missouri won’t have any drivers in the big race at Indianapolis tomorrow. But none of those drivers will go anywhere without Missouri-made fuel. All of the cars will burn ethanol from the Lifeline Foods plant in St. Joseph. Lifeline Vice-president Chris Caplinger says the race cars will get better mileage with ethanol than they got with their previous fuel, methanol.

In fact, he says, when the Indy Racing League switched to ethanol, the league decreased the size of the fuel tanks on the cars because fuel efficiency had improved and IRL had to decrease fuel tank size so the cars would continue making the same number of pit stops each race to keep fuel mileage in line with tire wear.

He says racing engines get improve mileage from ethanol because they’re designed to burn it. Mileage drops when ethanol is used in our regular vehicles because they NOT designed for alcohol. 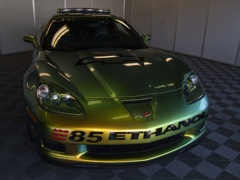 It’s not just the race cars that will use ethanol from St. Joseph. The field will be brought to the green flag by two pace cars for the first time this year. One is a Corvette that runs on E85, a gasoline-ethanol blend that is 85% ethanol. The car will be driven by two-time Indianapolis 500 winner Emerson Fittipaldi, an ethanol refiner in Brazil, his home country.

One of the cars in the race will carry the colors and logo of ethanol. Ryan Hunter-Reay will start 20th. the middle of the seventh row. 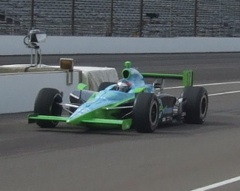 Reay, driving for a team owned by previous winner Bobby Rahal and television star David Letterman, bent his car badly when he crashed on the first qualifying weekend. But he qualified his backup car on the second weekend at 221.579 mph. Reay was the rookie of the year in the IndyCar series last year although he did not join the series until midway through the season. This will be his first "500."

Caplinger says the Lifeline ethanol plant in St. Joseph has shipped about 63,000 gallons of the fuel to the Indy Racing League for use in all sixteen of its races this season, including tomorrow’s race at Indianapolis. He estimates about five or six-thousand gallons will have been used in Indianapolis for testing, qualifying, and racing by the time the checkered flag drops tomorrow afternoon.

He says the improved power and better mileage produced by ethanol-burning racing cars proves the fuel is not an inferior fuel. "If you design your equipment properly, it’s a better fuel," he says.

The Lifeline plant went into operation last October. The 63,000 gallons of fuel it has shipped to the IRL is only a small percentage of the plant’s output. Caplinger says the St. Joseph plant is capable of producing fifty million gallons of corn-based ethanol a year.