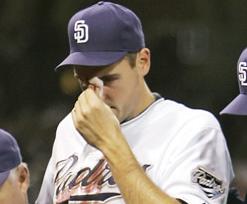 Albert Pujols hit a line drive right back at Padres pitcher Chris Young, breaking his nose and sending him to the hospital.  Two batters later, Pujols would slide into catcher Josh Bard spraining his ankle.  Watch the video here.

The Cardinals beat the Padres 11-3.  Skip Schumaker had four hits and a defensive gem when he made a diving catch in left centerfield.  Troy Glaus and Ryan Ludwick each had three RBI on the night as the Cardinals pull to within one game of the Cubs.

What story would you rather tell to your grandchildren?

Brad Lidge:  "Albert Pujols hit a home run off of me in the playoff that messed with my mind so much, I was never the same dominating pitcher I once was."

Everyone will be talking about the third inning.  Albert Pujols lined a ball up the middle that hit Padres pitcher Chris Young in the face breaking his nose.  After reaching first base, Pujols checked on Young, who had blood streaming from his nose as he sat on the pitcher’s mound with a dazed look on his face.  Pujols immediately came over to Young to check on him, then said a prayer with Padres first baseman Adrian Gonzalez.

Then later in the inning Pujols was coming around to score on a Glaus single and slid into catcher Josh Bard who had to be carried off the field.  Replays showed his ankle got twisted.  He ended up with a sprained ankle, though it looked much more serious.  Pujols went 0 for 3 after that and was lifted in the 8 th inning by Tony LaRussa who said Pujols was shaken by the two injuries he caused in the same inning.

Listen to Pujols after the game and watch the two plays.

Previous Post: « Royals lose at Boston again
Next Post: With session over, the battle for control of the House begins »