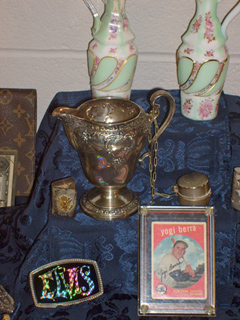 It’s been another good year for efforts to return unclaimed property to Missourians. The state’s Unclaimed Property Division reports it has returned more than $32.3-million worth of unclaimed property and funds, this fiscal year, to the rightful owners or heirs. That’s up from a record $22.9-million the last fiscal year.

State Treasurer Sarah Steelman, whose office operates the Division, hosted an open house in which reporters were given a chance to see some of the unclaimed items being held by the Division. Objects on display included family photographs and heirlooms, gold coins, and such items as an Elvis belt buckle and an autographed Yogi Berra baseball card. Steelman says the General Revenue Fund has more than $500-million in unclaimed property.

Unclaimed Property Director Scott Harper says items found in abandoned safety deposit boxes and elsewhere are held by the Division for two years, then auctioned off with the proceeds being held in perpetuity for the rightful owners. To learn more go to http://www.treasurer.mo.gov/mainucp.asp