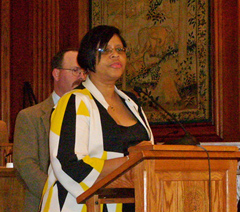 Coleman says she has endured highlights and lowlights during her political career, with serving the people of the state a highlight. She says a lowlight was hearing now-House Speaker Rod Jetton (R-Marble Hill) shouting, "Release the money, Governor," during Governor Bob Holden’s State of the State speech after the Governor had withheld money for education.