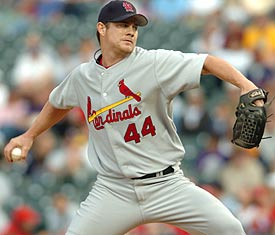 Jason Isringhausen was placed on the disabled list because of a hand injury.  This comes one day after he blew his sixth save and picked up his fifth loss of the season.

It is being reported that Isringhausen suffered two cuts on his right hand following last Friday’s game, when he blew a 2-0 lead with two outs in Milwaukee.  The St. Louis Post-Dispatch is saying it’s from him landing two open handed blows to a television set in the clubhouse after that game.

Since that game, those Isringhausen has made three appearances.  With that move to the DL, the Cardinals have added Chris Perez who was the closer for AAA Memphis.