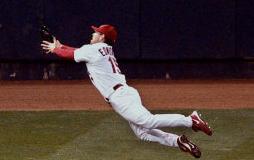 Jim Edmonds was cut by the San Diego Padres on Friday and was placed on waivers.  It is expected that once he clears waivers tomorrow, he will sign with the Chicago Cubs.

According to the Chicago Sun-Times , multiple Cubs sources said the team plans to pursue Edmonds, and one said Edmonds has told his agent to talk to no one before talking to the Cubs. The Cubs have considered a left-handed bat a need for weeks.

Edmonds was dumped by St. Louis for minor-league third baseman David Freese, and was hitting .178 in 90 at-bats in 26 games for the last place Padres this season.