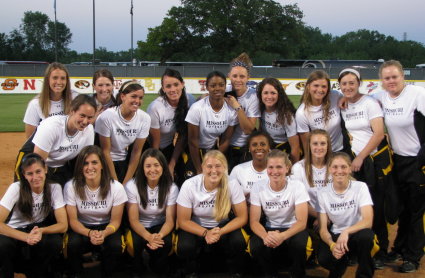 The Missouri softball team  will play in the NCAA Regional Tournament and will travel to Iowa City, Iowa, to take on No. 14 seed Long Beach State, Missouri Valley Conference Champions Creighton and host school Iowa. Missouri will begin tournament action against Iowa, Friday, May 16, at 7:30 p.m.

Missouri (44-15) enters the three-day tournament as the No. 2 seed.   The Tigers were one of only four Big 12 teams to make the tournament. Conference Champions Texas A&M, Big 12 runner-up Oklahoma and Texas were also selected to compete in a regional tournament, with Texas A&M serving as host in College Station, Texas.

The Tigers were eliminated from the Big 12 tournament in the opening round losing 5-3 to Texas Tech.

Outfielder and lead-off hitter Rhea Taylor was named Big 12 Freshmen of the Year.  She set the single season record for stolen bases.