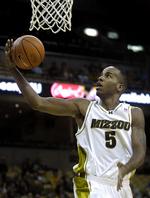 Lyons withdrew from the NBA draft on Thursday, and announced he will return for his senior season at Mizzou.  Lyons led the Big-12 in field goal shooting percentage, and led the Tigers with 13.1 points a game.

Lyons came to his decision after feeling out interest from NBA teams, and after meeting with his coaches at Mizzou, and his family.  Lyons said he had an interest in graduating, something he’d need to return to Mizzou in order to accomplish.  Averaging 16.1 points and eight rebounds his last 16 games, Lyons has become one of the leaders for the Tigers.  Surely, the rest of his team is happy with his decision.