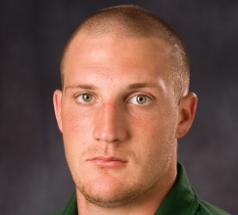 The Toronto Argonauts signed former Northwest Missouri State football student-athlete Dallas Flynn to a free agent contract. He’s the third athlete from the 2007 graduating class to head to the professional ranks after Xavier Omon was drafted by the Buffalo Bills in the sixth round of the NFL draft and Mike Peterson signed a free agent contract with the Green Bay Packers.

Flynn ended his career with 19.5 sacks, fifth in all-time program records, and 34 tackles for loss, tied for sixth. He also blocked three kicks and recorded 148 tackles in his four years at Northwest.

He’s the second MIAA player this season to join the Argonauts after Central Missouri’s Kendall Ricketts signed March 28. Flynn missed playing with former Bearcat wide receiver and punt returner Tony Miles, who was granted free agency by Toronto Feb. 16 and signed with the Hamilton Tiger-Cats Feb. 18. Miles won a Grey Cup with the Argonauts in 2004.

The CFL preseason begins June 12 with the regular season starting June 26. The 96th Grey Cup will be played Nov. 23 in Montreal.