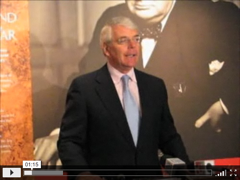 The list of star visits to the Churchill Memorial in Fulton, Missouri got longer today with the former British Prime Minister John Major’s visit to the museum, the fourth British prime minister to do so.  Major is in Missouri for several reasons, one of which is to be the fourth recipient of the Churchill Medal.  His time in Fulton will also be spent speaking to the students at Westminster College in Fulton, something Major says he does often.

“Primarily, I’d like to listen to them, engage them in dialogue, and answer their questions… and I have to tell you it’s a very good generation,” said Major, “If you go around the world I think you find a huge degree of interest amongst the best of young people everywhere as to what is happening in a world that is changing more rapidly than any we’ve seen at any stage in the past.”

Major was able to tour the museum just before he spoke to the media, and remarked on how much he loved it, and thought it was an excellent portrayal of Churchill’s entire life.  The memorial is across the street from the gymnasium where Churchill delievered his famous “Iron Curtain” speech.  Major called Churchill’s span of life “unmatched” by anyone in history.

When asked about the current state of relations between the United States and Great Britain, Major said the relationship is strong.

Fulton is the first of two stops in Missouri for Major, the second being St. Louis this evening.