You are here: Home / Sports / Bears’ Mazzola named national player of the week 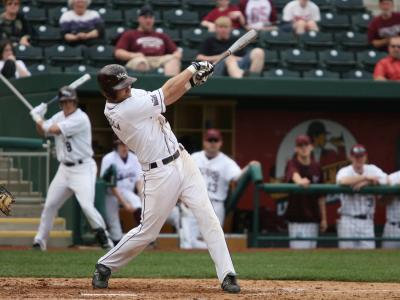 Missouri State senior first baseman Josh Mazzola has been named the "Louisville Slugger" National Player of the Week by Collegiate Baseball Newspaper and the Missouri Valley Conference Player of the Week for his performances against Arkansas and Indiana State last week.

Mazzola had one of the most prolific offensive weeks in Missouri State history, slugging six home runs over four games and driving in 14. He scored eight times, hit .533 (8-15), collected 26 total bases for a 1.733 slugging percentage and drew an additional four walks for a .632 on-base percentage.

This marks the fourth time in 11 weeks that a Bear has been honored as the league’s player of the week. Ben Woodbury has won twice and Ben Carlson earned the award one time.