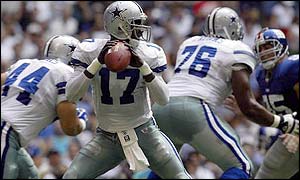 Quincy Carter admits had he laid off smoking pot, he would have been a better NFL player.  The 30 year old is getting another chance to play football.  This time in Kansas City.

The Kansas City Brigade signed the former Dallas Cowboy quarterback Carter who was a 2 nd round draft pick in 2001.  The Brigade at 1-7 and looking for a boost at their QB position.

Carter also played for Herm Edwards when he coached the Jets.  Carter has been working out the last four months after spending a couple of months in rehab.  Carter has all of the skills and the build, but he let drugs derail his career.

Carter will begin his Brigade career on the practice squad and his progress will be closely monitored by Head Coach Kevin Porter over the next several weeks.

The Brigade, who have had three starting quarterbacks this season, are excited to add another quarterback to the roster. "We are happy to give Quincy a chance to succeed in the Arena Football League. He has had success in the NFL and the af2; we feel he can do some positive things in the AFL.

portions of this story came from kcbrigade.com