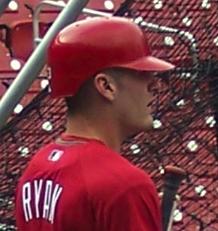 You can’t help but root for guys like Brendan Ryan.  He’s a kid who plays hard and gives his full effort all the time.  That was evident last year when he came up and hit .289 in 67 last season with the Cardinals.

Once David Eckstein signed with Toronto you figured Ryan would get a shot at being the everyday shortstop.  Then the Cards went out and signed Cesar Izturis and all of the sudden Ryan was the odd man of a crowded infield that included Pujols, Glaus, Izturis, Kennedy, Miles, and at the time Speizio.

I met Brendan at the MU-KU basketball in January after the Cardinals Caravan stopped in Jefferson City and I had a chance to sit and talk with him for most of the 2nd half of that game with no recorder rolling audio.  It was interesting the hear what goes through a player’s mind where he goes from thinking he may have a shot at starting in the big leagues to finding out the team signed a veteran shortstop.  There’s both worry and frustration.

It was crazy spring and things changed quickly in Florida.  It looked like Ryan might make the team after Scott Speizio got kicked off for his drunk driving incident and then as he was tearing up spring training pitchers, he got injured on a freak play.

After a rehab stint that continued with great hitting in the minors, Ryan is back with big league team and I had a chance to visit with him again about the up and down’s of spring training and what it’s like to be with the team and if he’s comfortable.