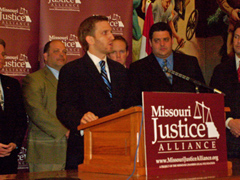 A lawyer at the center of what has become known as the "Great American Pants Suit" appears at the State Capitol on behalf of HB 2241 – a bill that would curb frivolous lawsuits.

Attorney Chris Manning, who began his law career in 1997 as a business litigation attorney in Kansas City, is the lead counsel in the Pearson versus Chung case. That’s the case in which District of Columbia Administrative Law Judge Roy Pearson sued Jin and Soo Chung, owners of a number of dry cleaning establishments, over a pair of lost pants. He sued for $67-million.

While the Chungs were found not liable, Manning says this lawsuit ruined the family’s business and led to the Chungs’ American dream becoming a litigation nightmare. He says Missouri must take steps to avoid this kind of thing.

HB 2241 is in committee at this stage, and Representative Bryan Stevenson (R-Webb City)  - the sponsor – doubts it will clear the General Assembly this year. He’s hoping the main elements of the legislation can be added to another bill that has a chance of passing.

Previous Post: « My new favorite Cardinal–Brendan Ryan
Next Post: The word is VOIP; we’ll use it in a sentence »