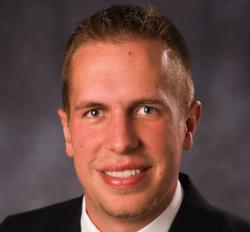 Former Northwest Missouri State men’s basketball player Austin Meyer ’06 has been named Assistant Coach to Steve Tappmeyer and the Northwest men’s basketball program. Meyer is completing his graduate work in physical education through the month of May. His official duties will start June 1.

"I’m excited Coach Tappmeyer has given me the opportunity to start my career here at Northwest as such a young age," said Meyer. "I’m familiar with the program and with school behind me, can devote all my efforts towards our team. I’ve met a lot of great people at this University and look forward to working with them on a professional level."

A native of Blue Springs, Mo., Meyer played four seasons with the Bearcats from 2002-06. He was the leading scorer and rebounder of the 2004-05 squad when he averaged 13.3 points and 5.4 rebounds. Meyer is the sixth-leading scorer in program history with 1,294 points. His 215 three-pointers remain the career record.

Meyer won an MIAA conference tournament championship and made an appearance in the Elite Eight during the 2003-04 campaign.