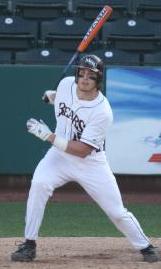 Missouri State sophomore designated hitter Ben Carlson was named the Missouri Valley Conference Player of the Week.  It is the third time a Bear has been honored with the award this season.

Carlson led Missouri State in nearly all offensive categories last week, hitting .526 (10-19) with two doubles, two homers and 10 RBIs. He also scored seven runs, walked three times, was hit by a pitch and stole a base to check in with a .947 slugging average and .583 on-base percentage.