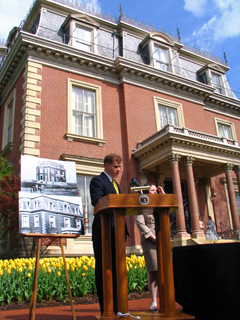 Governor Matt Blunt (R-MO) has signed a supplemental spending bill that includes $3-million for much-needed repairs at the Governor’s Mansion in Jefferson City.

The money had been available in the constitutionally-established Facilities Maintenance and Reserve Fund to repair and preserve state buildings such as the Governor’s Mansion, but the approval of the General Assembly was needed before the money could be allocated. In signing HB 2014 , Blunt made clear his belief that repairs are long overdue.

Blunt expects the $3-million to address the most significant strucutural issues, adding there will be a need for further renovations down the road. This current renovation, which could begin as early as next week, is expected to lead to the closing of the Mansion for at least a month, this summer, when the building will be uninhabitable.