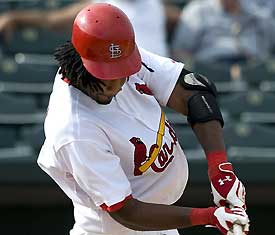 Brian Barton hit a pinch hit double and scored in the 9th inning after the Brewers tied the game in the 8th, as the Cardinals win 4-3 in Milwaukee in the first of two games.  Barton’s play has not gone unnoticed by manager Tony LaRussa.

Saying that he has been impressed with Barton from day one of spring training, LaRussa put the rookie in a tough position; a pinch at bat in the top of the 9th inning of a tied game against one of the hardest throwers in the game, Derrick Turnbow.  Barton answered the call.

Barton looked for a pitch over the plate and went after the first one he saw.  His double led to the go ahead run in the ninth.  Jason Isringhausen came in for the save.

Barton’s 9th inning heroics were set up by a crazy 8th inning.  With the score tied at two, Ryan Ludwick hit a line drive down the right field line that Corey Hart appeared to have, but the ball deflected off of his glove and Ludwick raced around to third on the three base error and would later score.

With the Cardinals leading 3-2, LaRussa turned to Ryan Franklin to hold the lead for Adam Wainwright who didn’t have his best stuff, but said he battled with what he had and got away with a couple of pitches.  With a runner on third and one out, Hart hit a ball to Ryan Ludwick in right field who lost the ball in the lights allowing the run to score and Hart to advance to third.  Then Bill Hall grounded to third baseman Troy Glaus who threw to Yadier Molina to cut Hart down at the plate.  Gabe Gross would single giving the Brewers 1st and 2nd, but Franklin got pinch hitter Craig Counsell to ground to Pujols and Franklin escaped a jam, by giving up just one run on three hits.