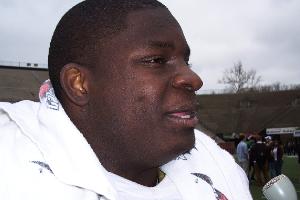 MU linebacker Sean Weatherspoon had a breakout year last season as a sophomore where he led the Tigers in tackles with 130.  Now, with the graduation of defensive lineman Lorenzo Williams, "Spoon" is becoming the vocal leader of this defense.

Sean Weatherspoon always has an upbeat approach, he’s always willing to take time to talk and from the first day I met him last year early in the season, I had the feeling he was destined for great things.

The play that sticks out in my mind was back in the Cotton Bowl, when he tipped a pass to the flat that was eventually intercepted by William Moore, but the game that comes to mind was at K-State last year when he had 11 solo tackles and 2 sacks.

He has a knack for always being around the ball and he did that on Saturday, coming up with four tackles, three of which were solo stops and two of those for losses.  It was necessarily the number of tackles he made, more so the quality.

After the spring game, he talked about being a leader with the new guys coming in and how exciting Missouri football is going to be this year.

Previous Post: « Mizzou Black and Gold final stats
Next Post: Daniel impressive at the start and end of first half »