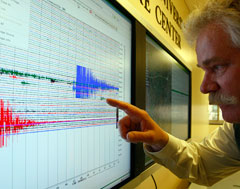 Some slept through it. Some were jolted awake.

Missourians felt a 5.2 earthquake this morning, awake or not. The National Earthquake Center in Colden Colorado says the earth moved about three miles underground under West Salem, Illinois — about sixty miles northwest of Evansville, Indiana.

A center spokesman says the quake was felt as far south as Georgia, as far north as Michigan, and as far west as Kansas. It’s thought the quake happened along a northward extension of the New Madrid fault. The earthquake center says it was strong enough to break some windows or knock things off of shelves but not strong enough to cause widespread damage.

Eric Haug, a systems engineer at the Saint Louis University Earthquake Center, checks data on a electronic sizemagraph following a 5.2 and 4.5 earthquake in St. Louis on April 18, 2008. The epicenter of the earthquake is located on the Illinois-Indiana state line about 130 miles east of St. Louis. (UPI Photo/Bill Greenblatt)