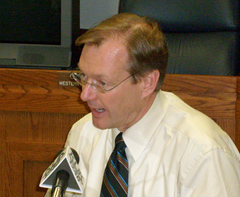 Republican gubernatorial candidate Kenny Hulshof (R-MO) has unveiled an ethics reform package he would like to see implemented if he is elected Governor.

The six-point plan deals with strengthening the Missouri Ethics Commission, ending the patronage system that awards license fee offices, a ban on all job-related gifts to Administration officials, disclosure and accountability for attorneys, campaign finance reforms, and the appointment of a nine-member task force to address topics that include lobbying reform, travel by elected officials, and political activity by governmental employees.

On campaign finance reform, Hulshof wants to replace the current limits with those similar to the ones that exist at the federal level. Hulshof says a $2500 contribution limit, indexed to inflation, would go hand in hand with a requirement that the Missouri Ethics Commission create a sortable database of all donors to each candidate committee.