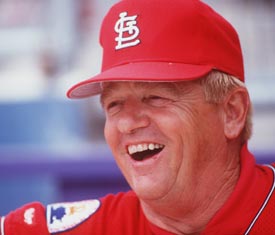 Herzog, a member of the inaugural Hall of Fame class in 1994, directed the St. Louis Cardinals to three National League championships and one World Series title in a six-season span in the 1980s.  Serving as manager for four Major League teams, the White Rat has compiled a .532 winning percentage, posting 1281 victories against 1185 losses.  Herzog’s best year in terms of winning percentage was in 1977 when he lead the Kansas City Royals to 102 wins against only 60 loses.

The Missouri Sports Hall of Fame Legends Award is the highest honor that the Hall can bestow upon its inductees.  In commemorating a Missouri Sports Legend, the Hall of Fame in 1999, began the practice of commissioning a larger-than-life size bust of the Legend, which is placed along The Legends Walkway outside of the Hall.  Along with the bust, a special commissioned piece of artwork commemorating the unveiling hangs permanently in the Legends Gallery inside the Hall of Fame.

For tickets or additional information, call the Hall of Fame at 417-889-3100 or visit the website at www.MoSportsHallOfFame.com .