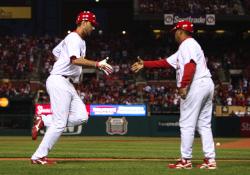 Tony LaRussa said it best when asked of Adam Wainwright’s pitching performance.  "Oh man."  That’s about all you can say as Wainwright not only pitched a good game, but helped himself out hitting a home run in the 2nd inning.

LaRussa said there were a couple of times the Brewers were poised to breakout big innings, but Wainwright held down Milwaukee to pick up his second win of the year.  He held the Brewers to just two runs, one earned while going 7 2/2 innings.

Wainwright, had plenty of run support as he helped himself with a home run in the 2nd off starter Carlos Villanueva.  Skip Schumaker also homered and Albert Pujols drove in two runs.

Things got scary in the 9th inning.  With one out and one on, JJ Hardy doubled down the right field line scoring Corey Hart.  Pinch hitter Craig Counsell then followed with a ground rule double to score Hardy and all of the sudden, Wainwright’s win looked in jeopardy.

Brewers catcher Jason Kendall then lined one over the head of Albert Pujols, who went up high to stab the would be tying hit.  Jason Isringhausen picked up his 6th save by getting Bill Hall to tap it back to him to strand the tying run at 2nd base.