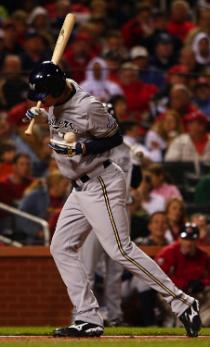 Adam Kennedy led a hit parade of singles, going 3 for 4 as the Cardinals have a 1 1/2 games lead over Milwaukee and the Cubs in the NL Central and is tied with Arizona for baseball’s best record at 10-4.

The Cardinals won with 12 hits, 11 of them singles, from eight different players. Seven different Redbirds either scored a run, drove one in, or both.  It was a particularly good night for Braden Looper, but he got the job done holding the Brewers to one run on three hits over five innings, but he walked five.

The bullpen did it’s job.  With the game close at 3-1, Kyle McClellan pitched two scoreless innings.  In fact, the Cards bullpen with McClellan, Ryan Franklin, and Anthony Reyes didn’t allow a hit and only allowed two runners to reach.  A walk by Franklin and McClellan plunking Corey Hart.