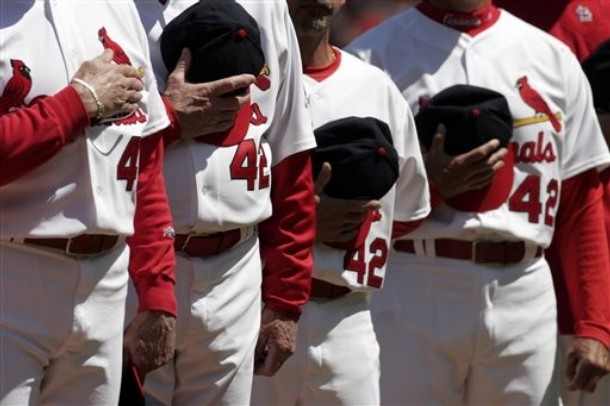 April 15th will forever be Jackie Robinson Day in Major League Baseball.  Again tonight, the Royals and Cardinals will join the league in honoring Robinson by wearing his retired number 42 tonight.

Tonight in Seattle, manager Trey Hillman and outfielders Jose Guillen and Joey Gathright will wear 42.  Just as they did last year, the entire Cardinals’ team will wear 42 to honor the first player to break the color barrier 61 years ago.

The Cardinals will have a pregame ceremony.  The special day will include Cardinals Hall of Famer Lou Brock who will greet two Jackie Robinson Foundation Scholars from the St. Louis area and catch a ceremonial pitch from each scholar. Brock will then be joined at home plate by St. Louis Manager Tony La Russa and Milwaukee Brewers Manager Ned Yost as a special video tribute is played.