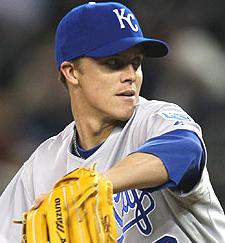 Different city, different team, same results.  For the second straight game, the Royals win 5-1 and get a complete game from their starter pitcher.  Zach Greinke is now 3-0 after giving up just one run and five hits and a walk to the Mariners.

Billy Butler and Miguel Olivo each hit their first home runs in the second inning apart of the three run inning and Jose Guillen had a two hit night against his former team.  With the help of Mark Teahen who made a great catch robbing a home run, Greinke pretty much took care of things again not giving the Mariners much to hit.

Greinke moves to 3-0 and his ERA is 0.75 in three starts.  That has helped give the Royals, the lowest ERA in baseball right now at 2.46.  The Royals are in first place, a half game ahead of the White Sox.