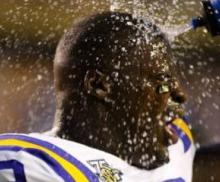 Twenty-six college prospects, including likely top-five picks defensive tackle Glenn Dorsey of LSU and running back Darren McFadden of Arkansas, are at Rams Park for personal visits through tomorrow.

Defensive lineman Vernon Gholston of Ohio State and Chris Long of Virginia, along with offensive tackle Jake Long of Michigan were in St. Louis over the weekend for more one on one time with the Rams’ coaching staff.  Dorsey came down with the flu, so he had to reschedule for Tuesday.

It’s a good indication that those three players in over the weekend along with Dosey are high on the Rams’ needs list as they are looking at the D-line or offensive line with the number two pick in the draft.  Of course, it’s reported that Jake Long of Michigan is in contract negotiations with the Dolphins who have the number one pick.

Here’s what draft experts are saying about some of the potential high draft picks.

GLENN DORSEY, Defensive Tackle LSU
Height: 6-2
Weight: 297
Some experts think this disruptive inside force is the best player in the draft if health concerns are answered.

CHRIS LONG, Defensive End, Virginia
Height: 6-3
Weight: 272
Known for his non-stop effort, but underrated athletically; had as many sacks (14) as Gholston last season.

Here’s a list of other players attending the Rams’ draft interviews.