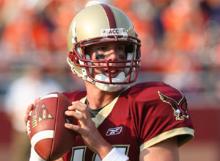 On Monday, Ryan was among a group of players again specially invited by the Chiefs for more one on one interviews.  If Ryan is still available come the 5 th pick of the first round would the Chiefs take him?

They have other needs that are more pressing including offensive line and cornerback and judging from the other invitees, I would suspect the Chiefs will focus on those two positions early as well.

Adam Schefter of NFL.com , shares his reasons why Ryan would be a good fit for the Chiefs.  If the Chiefs had more pieces in place offensively, like an offensive line that could run block or provide time for a quarterback, then I would take Ryan over Croyle or Huard, but if the Chiefs don’t improve that offensive line first, no quarterback will succeed with that awful o-line that was responsible for a team ranked 31st in rushing.

Scott Wright of NFLdraftcountdown.com has this to say about some of the prospects the Chiefs are looking at.

Matt Ryan, QB Boston College.  Off the charts intangibles and physical tools are more than adequate.

Branden Albert, OG Virginia.  Has superb size (6-7, 315) and could project to either guard or tackle.

Ryan Clady, OT Boise State.  You won’t find many guys this size with such good feet and athleticism