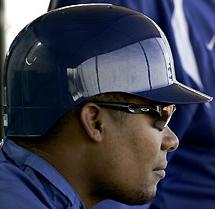 For Jose Guillen, he can focus on baseball.  His 15-day suspension for violations of Major League Baseball’s drug-prevention policy has been dropped.

Guillen found out about his penalty just after Dec. 6, 2007, when he had signed a three-year, $36-million contact with the Royals. The team was aware that a suspension was possible at the time.

Then the  Mitchell Report was released, with the recommendation that players named in the report not be punished. MLB and the Players Association have agreed to enhance their drug policies as recommended in the Mitchell Report.

Guillen’s punishment was revoked. Guillen and manager Trey Hillman comment on the situation.