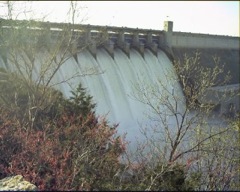 While "relief" has been the main focus for much of Missouri following the flooding of last month, the feeling of relief will have to wait.  The recent rains across Missouri have swollen rivers and lakes in several areas, causing flooding, and, in some cases, the evacuation of residents.

More than two dozen residents along Lake Taneycomo were asked to voluntarily evacuate their homes early Thursday due to flooding, while others in the area remain watchful.  In anticipation of increased flooding, an emergency shelter was opened by the American Red Cross at Branson United Methodist Church on West Highway 76, but the shelter remains vacant.

Table Rock Lake is expected to crest at a record-high 933 feet above sea level on Saturday.  In response, many residents and visitors have sought higher ground.  The US Army Corps of Engineers will continue to release water – 34,000 cubic feet per second, a record-high – through Table Rock Dam until Tuesday, at the earliest.  Taney County Emergency Management Director Chris Berndt, after a meeting with the Corps, said it’s important that the public is aware of the record high crest.

The amount of release was increased by the Corps early Thursday.  Berndt also said the Corps plans to end the water release on Tuesday, but that it could change.

"They’re anticipating having to do that until Tuesday, April 15, about the middle of the day," said Berndt, "but this is not set in stone; this could change."

The water levels of the lower Meramec River are forecast to be significantly impacted; the crests forecast for the weekend indicate the water level rising to within 10 feet of the height reached on March 21-23.  The Mississippi and Missouri rivers are expected to raise 3 or 4 feet above flood stage at St. Charles and St. Louis, not high enough for significant flood damage.  At Grafton, however, the detour may be flooded around a closed section of Illinois Route 100, a section also threatened by a mudslide.  In Pacific, remnants of last month’s flooding are still visible, causing some to believe more flooding wouldn’t make much difference.

The National Weather Service record 1.5 inches of rainfall in St. Louis on Thursday, with more storms expected this morning.