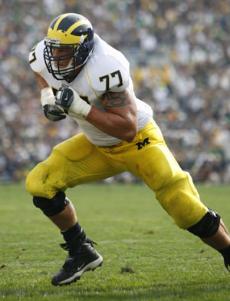 The Rams and Chiefs have a long list of needs heading into the NFL draft.  One area where both teams will focus in on is at the offensive line position.  Michigan’s Jake Long could be the solution.

The Rams have the second overall pick and while they could go with defensive tackle Glenn Dorsey of LSU or defensive end Chris Long of Virginia to help compliment last year’s number one draft pick Adam Carriker from Nebraska.  If they were to talk Dorsey for the inside, the could move Carriker back to his natural end position.  If they selected Chris Long, they could move Carriker inside who played nose at times last year and did a good job.

The Rams could also use Jake Long.  After a season ending injury to Orlando Pace, there are questions as to how the aging Pace will hold up.

The Chiefs’ offensive line is depleted and it’s highly doubtful OT Long would slip as far down as the Chiefs’ number 5 spot.  With center Casey Weigmann signing with Denver and the release of John Welborn at OG, the offensive line is in need of a complete over for one of the worse offensive teams in the league.

The Chiefs were 31 st in points per game, touchdowns, and last in rushing yards.  The Chiefs may be leaning to Virginia OG Branden Albert, who is 6’5 316 pounds.

The battle for Jake Long could belong to the Miami Dolphins.  Bill Parcells has reported set up a meeting to talk with his agents about a long term contract.  It has also been reported the Dolphins would be willing to trade the number one pick, but there hasn’t been much interest.  This could also be a ploy to get teams to talk to Miami about trading for the top pick.

The NFL Network has in-depth analysis of the Chiefs upcoming draft.