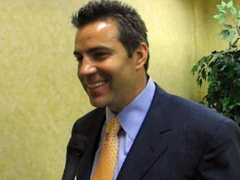 Kurt Warner was in Jefferson City to speak on behalf of the Vitae Caring Foundation for their Pro-Life Benefit luncheon and dinner.  Warner, now with the Arizona Cardinals is known for his two MVPs and Super Bowl XXXIV championship with the Rams.  Warner and his wife Brenda started their charity, the First Things First Foundation back in 2001 in St. Louis.

I had an opportunity to talk to Kurt about his own personal struggle to make it to the NFL and how he’s using his experience to help others.  Warner is fighting for a starting QB job in Arizona, yet he must take a young Matt Linehart under his wing to teach his eventual replacement.  Warner talks about running out of the tunnel when his name was introduced in Super Bowl XXXIV, and we find out why he gets help when it comes to drinking water.

Previous Post: « Former MSU player Ahearn named NBADL Rookie of the Year
Next Post: Question from Senate Democratic Leader: Are there too many lawyers on PSC? »