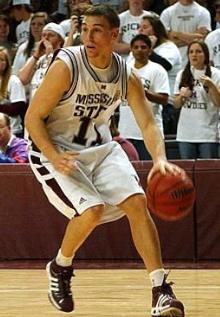 Ben Hansbrough, brother of Tar Heel Tyler got his release from Mississippi State and has spoken to Tiger coach Mike Anderson earlier this week.  Hansbrough, a junior-to-be, would miss next season because of NCAA transfer rules but would have two years of eligibility remaining because he hasn’t used his redshirt season.

The younger Hansbrough played in 33 games last year and average just over 10 points a game, but Hansbrough is looking for a different opportunity.  One source close to Hansbrough says that the team lacks coaching discipline and that the players are running the team.

In addition to Missouri, other schools have also contacted Hansbrough since they learned earlier this week that he was leaving Mississippi State.  Some of the schools believed to have been in contact with the sophomore player are Oklahoma, Butler, Notre Dame, Purdue, Arkansas, and Florida.  There may also be some interest from Kansas.

One thing for sure, the school that gets Ben Hansbrough will be getting a great athlete.  I spoke with Ben and Tyler’s grandfather E.T. Hansbrough and he says while Tyler focuses more on basketball, Ben is actually the better all around athlete.

Download/listen to ET Hansbrough on his grandsons (:30 MP3)