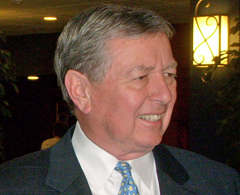 Former U.S. Attorney and Missouri Governor and Senator John Ashcroft returns to Jefferson City to address Republicans attending the Cole County GOP Lincoln Day Dinner. He spoke of the war on terror, America’s embrace of liberty, and the importance of national security. He praised presumptive Republican candidate John McCain, calling on the crowd of about 300 to work hard for the Arizona Senator’s election in November.

Prior to his dinner speech, Ashcroft visited with a couple of members of the media, and was asked which of the candidates for Missouri Governor he would back in the primary. He was non-committal, saying he will support the eventual winner in the fall.

As for his suggestions on a potential running mate for McCain, Ashcroft there is a tremendous array of qualified individuals, including Secretary of State Condoleeza Rice, whom he calls "a star in the cabinet." He adds, "She has the capacity to do any job in America." Asked if he would serve if called upon, Ashcroft made it clear he is retired from politics.