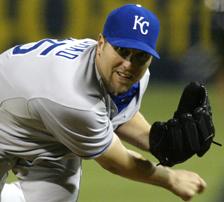 The Royals finished off their opening season road trip by beating the Twins 3-1 on Sunday after to go 4-2 to start the season.  The starting pitching has done well to keep the Royals in every game this season.

Following, Brett Tomko’s five scoreless innings to pick up the win, the Royals starting five went 3-2 on the trip pitching 39 of the team’s 57 innings and allowed just 15 earned runs for an combined ERA of 3.46.

What’s promising about this start is while Gil Meche has struggled a bit in his first two starts, which includes 9 earned runs on 14 hits including two homers; all expectations are that Meche will continue to give strong outings like he did last year.  Manager Trey Hillman will rely on young guys Brian Bannister and Zach Greinke who combined against the highly touted Tigers by going 14 innings and allowing just one run.

Bannister will start the home opener against the Yankees on Tuesday followed by a visit from Minnesota before taking a seven day trip out west to play the Mariners, Angels, and A’s.