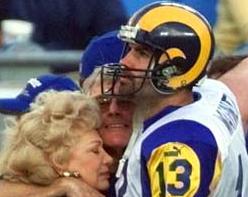 During the NFL owners meetings last week, Rams’ owner Chip Rosenbloom approached the NFL about the Rams wearing the colors they wore during their Super Bowl season as a way to show tribute to his mother and former owner, Georgia Frontiere who died in January.

The NFL, which has always had strict policies regarding the way players wear their uniforms have denied the request of Rosenbloom and the Rams stating that uniform requests must be made a year in advance.

I say what?  It’s not like the Rams want to change their uniform completely without the league getting an opportunity to approve and be made aware of a "new" look.  We’re talking about one game with a uniform that everyone is familiar with.

Why can’t an exception be made to the rule?  Frontiere’s death came just four month ago and the NFL is going to tell her son, nice idea on honoring your mom, but NO!

I thought it was a ridiculous story and just needed to vent.   I’m attempting to contact the NFL to see if I can get an answer as to why this rule is in place.