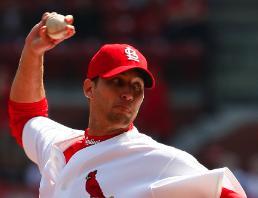 Several times during their first home stand of the season, Cardinals manager Tony LaRussa has talked about a solid team effort, each player giving their best, and players competing every pitch.  It’s all led to a 5-1 start.

LaRussa always pushes his teams to get off to quick starts while other teams may be trying to find their way.  Before you get excited, remember the Cardinals just completed a three game sweep of the Washington Nationals by winning 3-0 on Sunday who are…well…the Washington Nationals.  I think the Colorado Rockies are overrated.  Don’t give that team too much credit for that unbelievable run during the playoffs.   Their number one starter is Jeff Francis, a guy with a career 4.70 ERA.

Nonetheless, the Cardinals are playing well against the bottom half of the National League by turning in some solid pitching in the first week.  The starters have given up just four earned runs in 37 2/3 innings.  The Cards are also getting great play out of Rick Ankiel.  He’s hitting .348, just hit his third home run of the season and picked up his 6 th RBI in Sunday’s 3-0 win.  Yadier Molina has five RBI and Brian Barton, the rookie who started all three games against Washington for the struggling Skip Schumaker has stepped up and performed well, hitting .455 this season in the lead off spot.

The favorable schedule continues as the Cards hit the road to play Houston starting tonight.