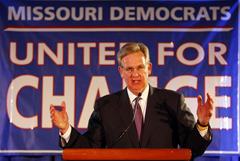 All of Missouri’s 16 superdelegates to the Democratic National Convention in Denver have now been chosen. Attorney General Jay Nixon and State Auditor Susan Montee have been selected by the Missouri Democratic Party State Committee. The selection of Nixon and Montee means all three of Missouri’s statewide Democratic elected officials will be superdelgates.  Secretary of State Robin Carnahan was already a superdelegate.