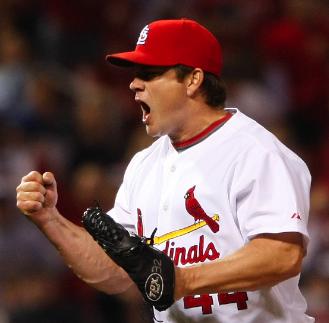 The Cardinals have made three in a row.  They hold off the Washington Nationals 5-4 at Busch Stadium. Kyle McClellan worked out of a bases loaded jam in the top of the 7th with no outs and Jason Isringhausen works out of 9th inning trouble for his second save.

The Cardinals came after former Royals’ starter Odalis Perez tagging him for five runs on eight hits in just four innings, including a two run homer by Rick Ankiel, his 2nd of the season.

Braden Looper was solid, six innings, just one run.  Another good starting pitching performance from a rotation that is supposed to place warmers until the aces of the rotation get healthy.

Trouble came in the 7 th .  With the bases loaded with no outs and the Cards up 5-2, they called on rookie and life long Cardinal fan Kyle McClellan.  He walked in one run and former Cardinal Ronnie Belliard drilled one at third baseman Troy Glaus that went off the tip of glove for an infield hit, but McClellan also got two strikeouts with the bases loaded before getting a ground ball out to escape the 7 th holding a 5-4 lead.

Jason Isringhausen, picked up the save, but not before dealing with some issues, which isn’t anything new for the Cardinals’ closer.  The Nats threatened again in the 9th.  After Izzy struck out Nick Johnson, he allowed a single and a walk before getting Ronnie Belliard and Felipe Lopez to strike out to end the game.