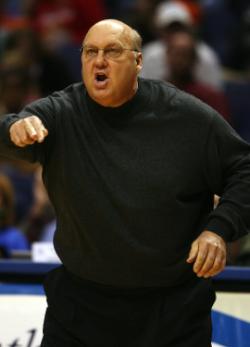 St. Louis University basketball coach Rick Majerus said he is not interested in coaching at Marquette, which happens to be his alma mater.  He quickly put any discussion to rest following Indiana Universities hiring of Tom Crean who left Marquette for the Big 10.

Majerus just completed his first year at SLU where the Billikens finished 16-15, with a 7-9 record in the Atlantic 10.  Majerus was an assistant under Al McGuire and was also a head coach there in the 80’s before becoming an assistant with the Milwaukee Bucks.

His mother still lives in Milwaukee and he has a house there, but Majerus told the St. Louis Post-Dispatch that he still has a lot to accomplish and is looking forward to continuing what he started in St. Louis.