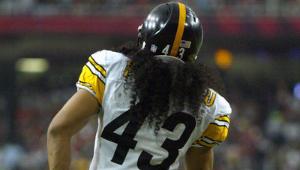 The Beastie Boys had a line to their one their songs that read, "I’ll kick you out of my home if you don’t cut that hair!"  They could have been talking about late Chiefs owner Lamar Hunt and Arrowhead Stadium.

Lamar’s son, Clark Hunt, who now runs the Chiefs says that the organization has been pressing for the NFL to outlaw long hair flowing from underneath helmets.  Hunt told the Kansas City Star his father was a stickler for being able to see the player’s name on the back of their jerseys.

Well, that vote has been pushed aside for awhile until the owners can discuss the the topic in greater detail, but the owners did get some business take care of the last couple of days.

One idea that got shot down was the thought that if a wild card playoff team finishes with a better record than a division winner, the wild card team should host a playoff.  The owners didn’t even bring it to vote when a show of hands determined it wouldn’t even be worth the time.  That idea was shot down and I applaud the owners.  If you do not reward division winners, it minimizes the importance of division rivalry games.  The wild card was set up for one main reason, that if a team did have a good year, they wouldn’t be penalized for being in a tougher division.  However, you can’t reward 2 nd place teams with a home playoff game.

The following proposals were among those passed Wednesday as the league meetings concluded:

* The team winning the pregame coin toss can defer its decision until the second half, much like the current college rule.

* The 5-yard facemask penalty was eliminated. The 15-yard penalty for twisting, turning or pulling the facemask remains.

* The force-out rule along the sideline was eliminated. A receiver is now required to get two feet down in-bounds regardless of defensive contact.

* Instant replay was expanded to include field-goal reviews.