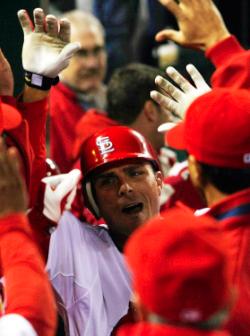 If a major league baseball team finds themselves, a five tool player, they have something special.  Those tools are listed as being able to hit for average, hit for power, have speed, excellent fielding skills, and a strong throwing arm.  Rick Ankiel showed flashes of that last night in the Cardinals 8-3 win over Colorado.

Ankiel had three hits, including his first home run of the year which came in the 4th inning off of Rockies starter Aaron Cook.  (Shown celebrating with teammates, by Bill Greenblatt, UPI)  He displayed head’s up base running in the 2nd inning when he went from first to third on a base hit by Yadier Molina.  He would then score their first run on an Adam Kennedy ground out.  While he made an error, he also made a fine diving catch in center and then made a strong throw to Troy Glaus at third on a fly ball out to keep a runner from advancing.

Tony LaRussa is impressed with how quickly, in less than 300 career at bats, Ankiel has been able to develop from a former pitcher to everyday center fielder.

Along with Ankiel’s great night, Todd Wellemeyer’s performance can’t go unnoticed either.  Wellemeyer went five innings giving up a solo home run to Brad Hawpe, but struck out six batters along the way and picked up his first win of the year.

Albert Pujols reached base five times with two hits and three walks, and Ryan Ludwick, one of the many feel good stories on this Cardinals team this year, enjoying his first opening series with the big league club drove in three runs while going 3 for 5.