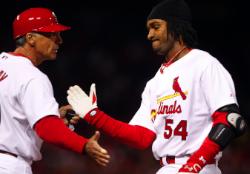 While the Cardinals lost yesterday 2-1 on opening night, it was still a special night for two players making their major league debut.  St. Louis native and Hazelwood West grad Kyle McClellan grew up a Cardinals fans and two years never thought he’d pitch again after having ligament replacement surgery and then a second surgery on his elbow.