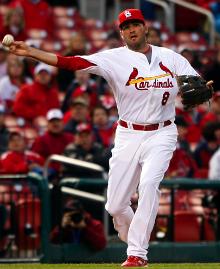 Ryan Franklin gave up a single to Troy Tulowitzki and a double to Todd Helton to start off the 8th inning.  Then, a throwing error by new third baseman Troy Glaus allowed the Rockies to tie the game and things got worse from there. (Photo by Bill Greenblatt, UPI)

After the throwing error that Glaus says he just made a bad throw on, the Rockies loaded the bases.  Lefty Randy Flores came in and struck out the first two batters he faced, but then walked Jayson Nix to give the Rockies the lead.

Kyle Lohse, making the start for the Cardinals, a day after Adam Wainwright’s start got washed out, did all the Cardinals could ask for.  He kept the Rockies off the board for five scoreless innings, allowing just three hits and three walks while striking out three and left in line for a win.

Kyle McClellan who had major arm surgery two years ago, and has never pitched in AAA ball, made the jump from AA to the majors and pitched a scoreless sixth inning retiring Matt Holliday, Garret Atkins, and Brad Hawpe in order for his first major league appearance.

Kip Wells, who went 7-17 for the Cardinals last year, was picked up by the Rockies for long relief work and would have come in on Monday had the game not been rained out.  Instead, he got the emergency start and went 5 1/3 innings giving up a solo home run to Yadier Molina in the 5th.

Download/listen to Glaus and LaRussa on the error (MP3)